From Venice to CERN 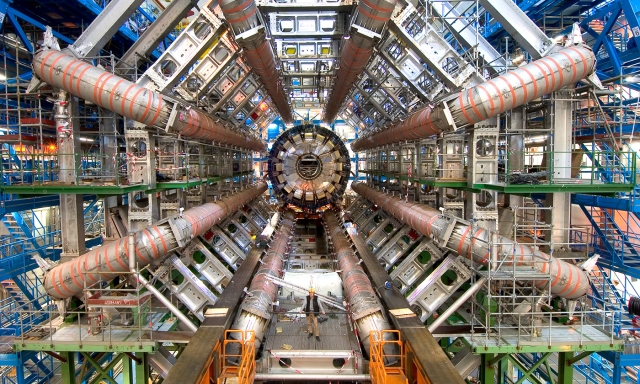 Jan Morris’ brilliant city biography Venice displays the most incredible curiosity and passion for the world, and it has been stuck in my head ever since picking it up last month.

In it she weaves history with the present, humanity into the entanglement of our inanimate creations, and what she sees in civilization, whether staring at its people or its walls, is hugely inspiring.

Like the city she conveys, her book is a work of art in itself, and beyond her subject, she makes you realise how much more there is to contemplate in the sights of daily life.

Today there was one sentence from it which strangely stuck with me, for it seemed quite out of place with a book so often caught yearning for the past. Ten pages of free-flowing amorous whimsy for the Venetian gondola are ended by the surprising remark that ‘it is the most beautiful instrument of transport on Earth, except (for) perhaps the Jet aircraft.’ Caught in the magic of the canals, and the wish for the city to be returned to its ancient power, it is startling to see the symbol of Venice (and thus her whole book) be so casually surpassed by one of the constructs of modernity that has contributed to its demise.

I think that is the beauty of the comment however; she takes no sides. Organic vs GMO, old architecture vs new, local vs world commerce, our news is often stuck in arguments that essentially revolve around conservatism against progress, and as it is endlessly common to find people slating or preaching one side of the argument, it is hence lovely to hear the voice of someone who sees both, yet almost solely from a point of entrancement.

That is perhaps the gift to the historian I would imagine. Seeing activity and structure not as a permanence, but transient, in the context of the ever-changing sequences and reasons that have led to its arrival, and in the excitement of knowing that it itself will come and go. So much becomes awe-inspiring, as the immense quantities of time and ingenuity taken to arrive at any point have been studied, contemplated and appreciated.

This kind of thought has even made me reconsider cities like Dubai and Kuwait. What seemed before to me nothing but monstrosities of commerce, sudden appear as these crowning triumphs of mankind. To have constructed skyscrapers in the midst of desert sands; I don’t think there could be any greater beacon of humanity’s will, or symbol of the evolving tides of trade.

Though it was not Dubai or Kuwait or Venice that sparked such admiration today, but an article on CERN. The picture above was at its start, and before reading I found myself mesmerised for some time just by the mechanics on display (not that I understand a thing), and by the sight of that man underneath, a reminder of just which species it is that is behind this. That precocious tool-fashioning ancestor Homo Habilis then flooded to mind, as I couldn’t help but note how far he had come; trading his fur for the yellow jacket of the on-site mechanic, and his axe to crack nuts, for the wrench to build, well, giant particle accelerators.

I am going to book tickets to see it as soon as possible. For if instruments of transport can comprise even the ferrying of particles, I am quite sure Jan Morris would agree that the gondola has yet another contender.

Hi I'm Sam and I write here exclusively at Samuel's Travels. Exclusively as by and large no-one wants me writing anywhere else. Please enjoy yourself while reading.
View all posts by Sam →
This entry was posted in How To Learn Italian. Bookmark the permalink.

2 Responses to From Venice to CERN